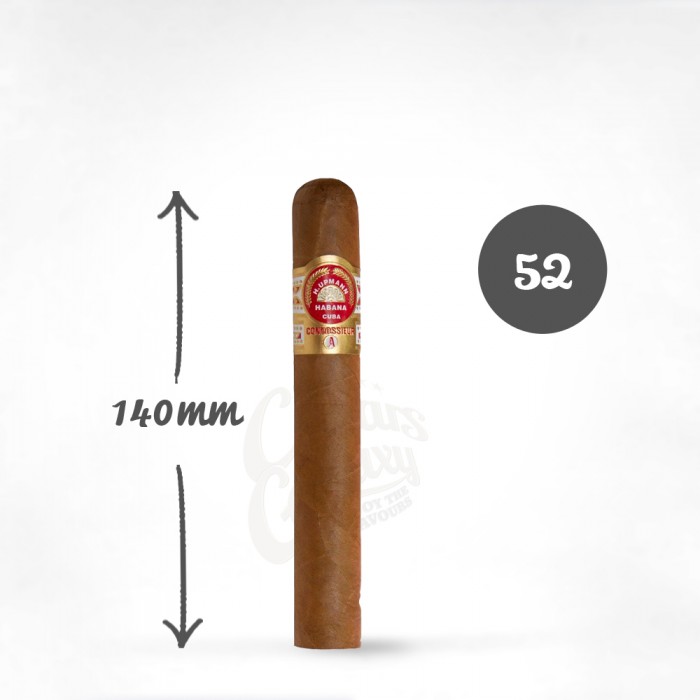 Connoisseur A is H. Upmann's new cigar that came to conquer demanding palates. It's vitola Genios and complements the company's lineup of big rings helping it to dominate the 21st century!

H. Upmann, always unpredictable, turned a typographical error into the new cigar ring to a trademark. The Connoisseur became Connossieur and is preparing to take his place in your humidor!

Connoisseur A is a cigar released by Habanos in 2013. It has a smooth butterscotch wrapper with mild flavors and excellent draw. At the beginning cream, milk chocolate, salted caramel and cedar with a hint of spiciness from black pepper make their appearance. It continues  with cocoa and  vanilla flavors, coffee notes and nuts with fruity undertones to the end. The flavor notes are blended so well  definitely lives up to its name “Connoisseur”, not only for the afficionados but also for beginners to cigar world.

Intensity of Taste: Light to Medium

Herman Upmann was a banker from Germany who so loved Cuban cigars that he moved to Havana in 1844 and set up as both banker and cigar maker. His bank closed in the early 1920s but his cigars live on as a fine example of an elegant light to medium-flavoured Habano.

All the leaf in H. Upmann is from the Vuelta Abajo tobacco region.

Gold medals in no less than eleven international exhibitions during the 19th Century adorn the box — as does Herman Upmann’s personal signature.